The other week we took a short vacation with some friends to Madison NH, just south of Conway, on the south-eastern edge of the White Mountains. We rented a house in a large village called “Edelweiss.” It was a super fun time to get away for a few days. While there our friend Abe and I ventured out to one of the many many trails in the immediate area. Wanting something difficult but not too lengthy we settled on the Carter Ledge Trail. This trail climbs up to the top of Middle Sister Peak, which is adjacent to Mount Chocoura (the former connects over to the latter via a number in interconnecting spurs). Alltrails.com lists the Carter Ledge Trail as “hard” and it certainly was a challenge. At 6.8 miles round trip we started at around an elevation of 750ft., climbing to about 3,200 ft. for a total of 2,667ft. of climbing in 3.4 miles.

The first mile or so was nice single track; rocky and rooty, the trail undulated at a steady climb, throwing in some delicious pine needle sections into the mix. By mile 1.5 the climbing was steady, the trail was much more technical, and began to involve an increasing amount of scrambling. You can see by the elevation graph that after the dip at  mile 2.5 the trail rose sharply—that is when the real bouldering began. The trail gradually turned from hard forrest into an alpine zone, and eventually into exposed rock, shrubs, and short trees.

That was the technical account of the run. The experiential account was that (a) Abe is in much better shape then me (he was gracious enough to twice double-back and check on me), and (b) having 4 tacos and 3 beers the night before was…not the smartest choice to have made. By about a mile into the run I was feeling bloated and crampy, and things only got worse. As the climbing got more intense, every time I lifted my leg to stretch over and up to a ledge my intestine moaned and pushed me closer to a blowout (though what kind I was scared to find out).

Luckily I never did. 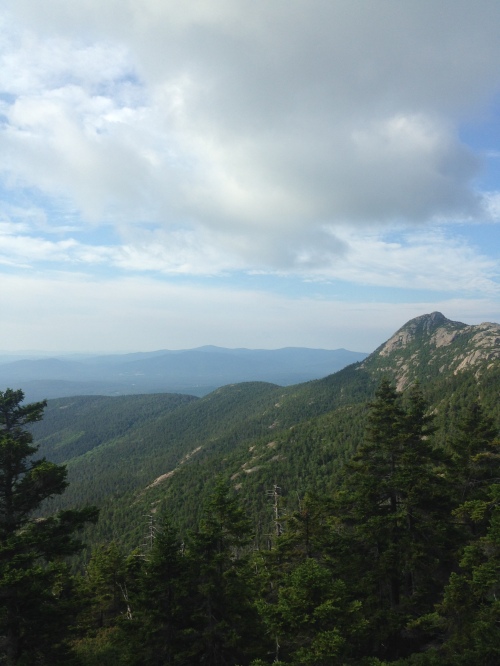 Looking back at Mount Chocoura, the higher peak that we decided to forgo. Wise decision. 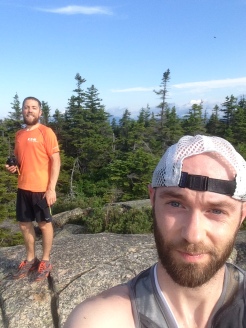 That guy kicked my ass.

Hmm, 4 tacos was too many tacos.

After we summited I got my breath back and began to feel much better. We started back down, and the descent was infinitely better. We chatted and joked about how we were glad to have forgone the longer Mount Chocoura loop that would have added 2 extra miles and another almost 1000ft. of climbing. Eventually I was able to pick up the pace and Abe let me pass—I relish technical downhill running, and I was in heaven for the last mile as we cruised back to the start of the trailhead. 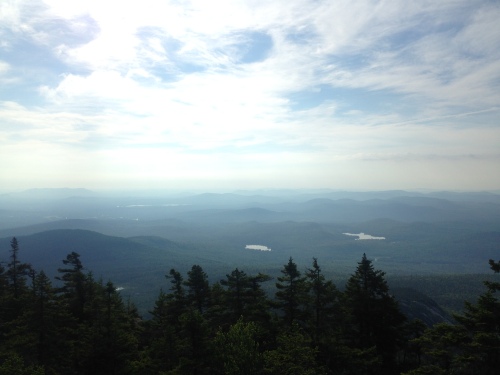 The view east. Lots of small peaks and hidden lakes and rivers. The bulk of the White range is to the left (North).

I have never run in the White Mountains before. I had heard about their technicality and their beauty, and we got a taste of both. I can’t wait to get back to run them again, hopefully with better training (and a stomach less full of tacos and beer).

SURPRISE! I thought I didn’t want to run this again?! 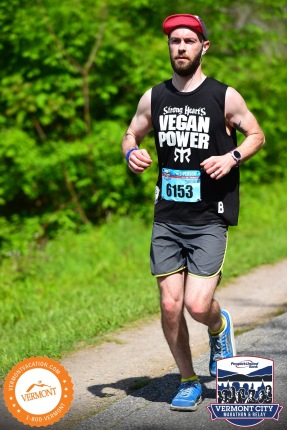 So, one year ago I celebrated finishing the third leg (10 miles) of the Vermont City Marathon Relay, having run with a 3-person turned 2-person relay team (I ran the 10 mile leg). I enjoyed the race, my legs felt amazingly good, and I toasted never having to run the race again. Done and done.

Apparently my resolve only lasted a year. Same friend; another teammate shortage; same outcome—I’m running. This time I ran the 1/2 Marathon relay. So once again I find myself running a road race—not overly excited about running on the roads, but adequately trained and coming to realize that diversifying the type of running is probably best for your overall fitness.

Our combined-relay time was just under 3:30. Dharma ran a 1:41 and I ran a 1:45; not my best half marathon but certainly nowhere near my worst. It demonstrates to me that even with a small amount of training I can drop into a half marathon and do decently well. It also helped that I wore my “Strong Hearts Vegan Power” shirt—this always gets me lots of cheers and provides a real morale boast. 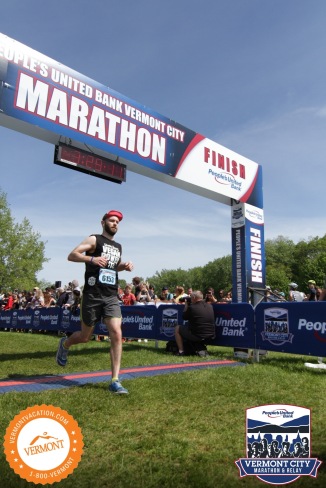 I’d say that I’m not going to run this ever again, but we know how far that got me last time.