Vegan is not a diet, but when it is…

For us this is not just how we eat.

For us this is not just about trying to be healthier.

For us this is not a trend.

For us this is not a diet.

For myself, the evolving relationship with being vegan——with eating a wholly plant-based diet——started more as just another turn in my life. Becoming vegetarian was easy. Meat held no power over me, and giving it up was as simple as setting an ice cube out in the hot sun and watching it slowly melt away. (Here I have to credit Katie as the impetus.) As time when on, however, it felt like a shift away from all animal products was not only logical but essential.

Turning “pure vegetarian” or “wholly plant-based” was not hard, but it did and still does present us with a life-shifting paradigm. I, however, am all about embracing such paradigms. Each step in one’s life, each encounter with “the new” and “the different”  will bring the possibility of challenges and hardships. But I have adopted the ethos that it is often better to simply make/accept something into your life, make it who you are and move forward with it. But isn’t this what people do, rather dramatically and instantaneously when they have children? Or when they marry? Or date? Or start school or a new job? Yes, you bring your old-self with you to these new experiences, but the newness of those experiences requires of you to be open and willing to accept both the unknown and change. Without these capacities you will continually drag a weight behind you, scarring your life and the lives of those around you as you continually lament your situation.

Many people avoid these at all costs, but becoming vegan is all about them. It is all about seeing your food, seeing yourself, seeing animals, seeing your relationships with the world……differently. That is why vegan is not a diet. Vegan is not about a short term change. It is not about a limited stance, an immediate view of your world, but rather about how what you are doing will affect life in the long term. Diets are crap because they do not focus on changing your life overall. Diets don’t aim to change you they simply change your behavior. While

While I began a vegan rather unconcerned about the lives of the animals I have grown into a person who is wholly aware that through my actions less suffering is occurring by 1. Will my not consuming animal products alleviate all suffering? No. Will my not partaking in animal products change the world? Probably not. But “vegan,” for me, is about living by means of a set of principles and demonstrating, through my actions and words, that I choose not to engage, to the best of my abilities, in increasing the amount of suffering in the world.

I am not perfect. My actions are not perfect. I will fail. But the absence of perfection and the prospect of failure does not prevent my trying, nor should it stop anyone reading this. That is why when vegan becomes a diet it has failed to engage the participant with the real essence of what the very concept of vegan is. Yes, any step towards alleviating suffering is the right step, and choosing vegan-as-a-diet may display similar outward behavior, however going vegan purely for diet reasons is to disregard the substantively complex nature of what it means to be vegan.

In all our imperfections and deficiencies.

And you should be to.

Getting the opportunity to head to England might turn out to be a once in a lifetime opportunity, so we decided to live it up and indulge in as much delicious vegan food as we could. I’ve detailed our trip, which consisted of 3 days in London, 3 days in Canterbury, and 1 final day back in London. The food we found was some of the most amazing fare we have ever tasted, which only goes to show that veg food can be found all over the world and can be accessible and affordable for anyone who really wants to eat healthy and ethically.

As I said in the other England post, everyone should fly British Airways. Let’s leave aside the free booze—the food was actually pretty good for airline food. We were amazed. Plus, we got ours first!

This might look like just a vegan boutique, but Vx (pronounced “V cross”) offers lots of pastries and simple sandwiches.

Panini with vegan bacon, ham, and a gherkin with Violife vegan cheese. (no picture) 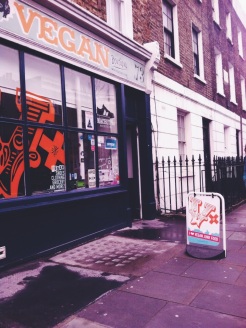 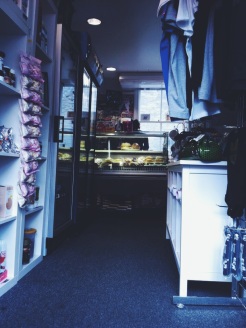 Unfortunately the light was so low that I couldn’t get a good picture of our food.

Gnocchi with cashew cream spinach sauce and a Caesar Salad.

Risotto bites and a Caesar Salad with some sort of pea side. (Not gonna lie: I cannot remember everything we ate.)

Burger of the Day: kidney bean, pepper, back olive, tofu and spring onion with aeoli and sweet potato chips

Celeriac, leek, and sage soup with a olive and sun-dried tomato pate. 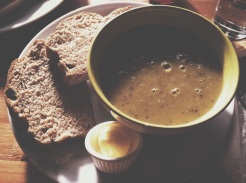 222 Pancake: (Usually with Vanilla Ice Cream) we had this with Raspberry Ice Cream wrapped in wholemeal pancake topped with warm vanilla and chocolate sauces. (no picture) 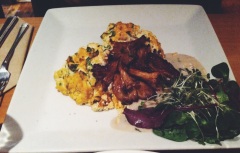 Plus a Chico Cookie to go for the flight back…

Another better than expected meal… 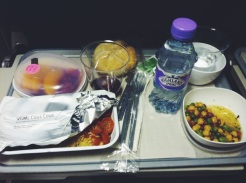 *The winner for the trip was 222 Veggie Vegan’s Oyster Mushroom & Spinach Raclette — those seared oyster mushrooms and that cashew cream sauce?!?! Sublime.

**Hands down the dessert winner was Cookies and Scream‘s Gosh Brownie with Vanilla Ice Cream — what?! you can have a brownie, by itself, for lunch or dinner! On a side note, soy ice cream in the UK is incredibly smooth (almost like soft serve) rather than being ‘icy’ like it is in The States.

It was really nice to be immersed in a large city that afforded us so many options and such diverse, delicious food. That being said, ‘Veg’ and ‘Vegan’ options are getting easier and easier to find no matter where you live, and we can only hope that this trend continues into the future.